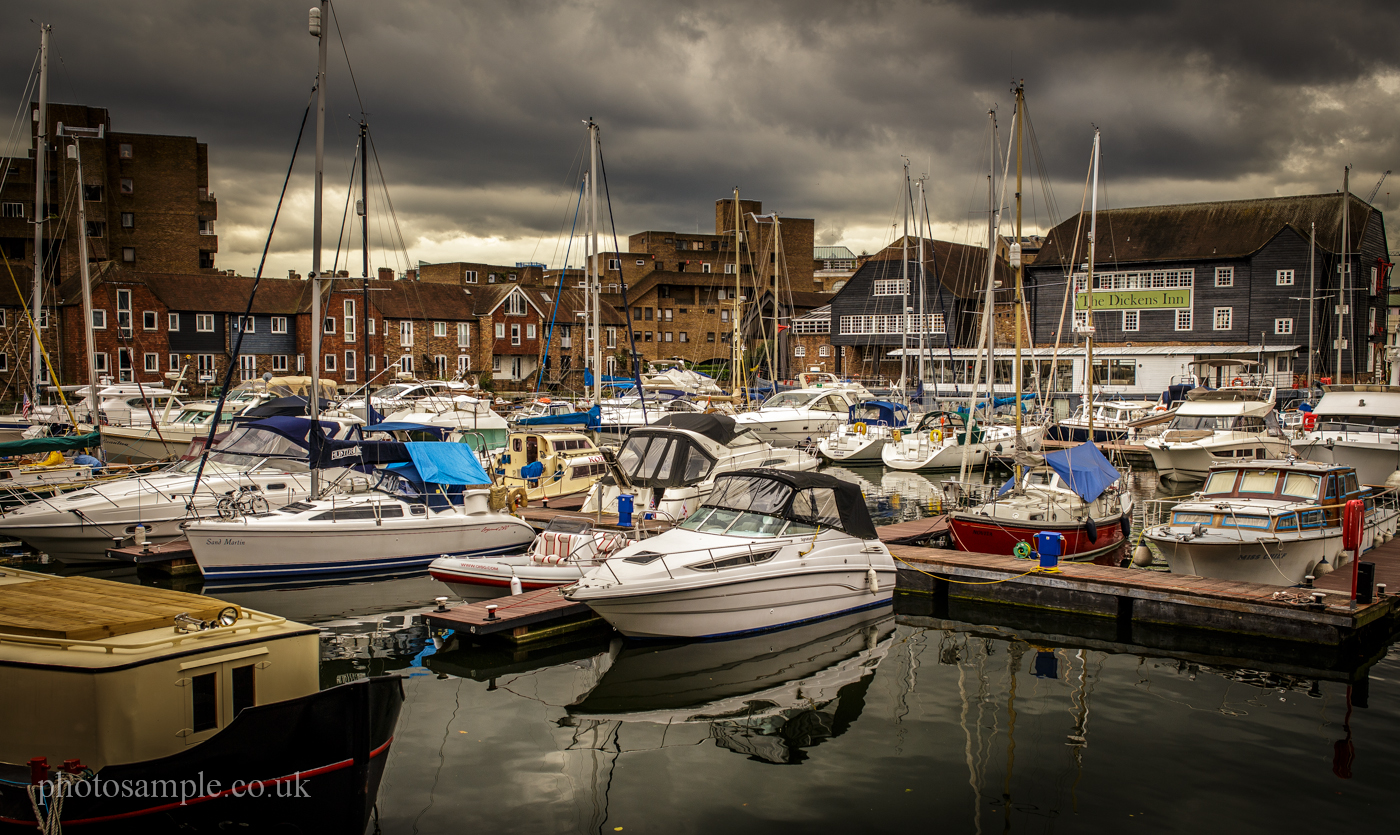 Posted by: admin October 7, 2013 in Architecture, London Leave a comment

St Katharine Docks took their name from the former hospital of St Katharine’s by the Tower, built in the 12th century, which stood on the site. An intensely built-up 23 acre (9.5 hectares) site was earmarked for redevelopment by an Act of Parliament in 1825, with construction commencing in May 1827. Some 1250 houses were demolished, together with the medieval hospital of St. Katharine. Around 11,300 inhabitants, mostly port workers crammed into insanitary slums, lost their homes; only property owners received compensation. The scheme was designed by engineer Thomas Telford and was his only major project in London. To create as much quayside as possible, the docks were designed in the form of two linked basins (East and West), both accessed via an entrance lock from the Thames. Steam engines designed by James Watt and Matthew Boulton kept the water level in the basins about four feet above that of the tidal river.

Telford aimed to minimise the amount of quayside activity and specified that the docks’ warehouses (designed by the architect Philip Hardwick) be built right on the quayside so that goods could be unloaded directly into them.
The docks were officially opened on 25 October 1828. Although well used, they were not a great commercial success and were unable to accommodate large ships. They were amalgamated in 1864 with the neighbouring London Docks. In 1909, the Port of London Authority took over the management of almost all of the Thames docks, including the St Katharine.
The St Katharine Docks were badly damaged by German bombing during the Second World War and never fully recovered thereafter. Because of their very restricted capacity and inability to cope with large modern ships, they were among the first to be closed in 1968, and were sold to the Greater London Council. Most of the original warehouses were demolished and replaced by modern commercial buildings in the early 1970s, with the docks themselves becoming a marina. The development has often been cited as a model example of successful urban redevelopment.
There was at one point a plan to open a St Katharine Docks tube station on the proposed Fleet Line. It would have been between Fenchurch Street and Wapping. An eastwards extension was eventually built as part of the Jubilee Line but this took a different route south of the Thames. The closest station to the Docks today is Tower Hill.
Between 2005 and 2008 the former Danish lightship “Lightship X” (Ten) was moored on the west dock, and used as a restaurant, before returning to Denmark.

The area now features offices, public and private housing, a large hotel, shops and restaurants, a pub (The Dickens Inn, a former brewery dating back to the 18th century), a yachting marina and other recreational facilities. It remains a popular leisure destination.

The east dock is now dominated by the City Quay residential development, comprising more than 200 privately owned flats overlooking the marina. The south side of the east dock is surrounded by the South Quay Estate which was originally social housing. The dock is still used by small to medium sized boats on a daily basis. 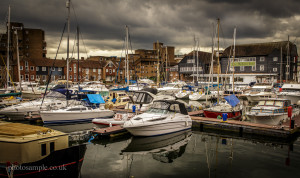 The Gloriana is a 28.6-metre-long (94 ft) British royal barge. She was privately commissioned as a tribute to Queen Elizabeth II for her Diamond Jubilee, and was the lead vessel in the Thames Diamond Jubilee Pageant.

The project to build Gloriana was initiated by Lord Sterling, who stated he got the idea for a waterborne tribute to the Queen for her Diamond Jubilee from her eldest son, Charles, Prince of Wales. Lord Sterling financed the estimated £500,000 construction cost of the project. Additional backers included Sir Donald Gosling and Canadian billionaire Galen Weston.[3] After leading the Jubilee parade Gloriana will be presented to the Queen as a gift.

Gloriana is a 28.6-metre-long (94 ft) rowing barge. It is powered by 18 oarsmen and inboard engine, and can carry an additional 34 passengers and crew. According to Lord Sterling, the design is inspired by Canaletto’s London paintings of 18th-century barges.According to The Daily Telegraph, the design resembles the boat used by the Lord Mayor of London in the 1800s.
Construction began in November 2011 at a site in Brentford, and was led by master-builder Mark Edwards. The materials used includes wood from sweet chestnut trees from Prince Charles’s estate. The sculpture and ornate carvings were designed and produced by Polygon Scenery, managed by Dave Crosswell, which were decorated in gold leaf.
The Gloriana’s oars were made by Windsor, Berkshire based firm of J Sutton Blades, who have constructed the ornately-decorated oars. They have been making oars and sculls since the 1970s. Normally for Stanley & Thomas wooden boats. 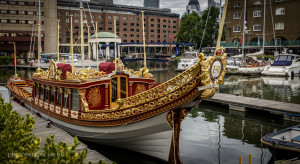 One Canada Square (often incorrectly called Canary Wharf, after its location) is a skyscraper in Canary Wharf, London. It was the tallest building in the United Kingdom from 1990 to 2010, standing at 235 metres (770 ft) above ground level and containing 50 storeys. In late 2010, it was surpassed by The Shard (completed in July 2012) which stands at 309.6 metres (1,016 ft).

One Canada Square was designed by principal architect Cesar Pelli, who based the design and shape mainly on the World Financial Centre and the Elizabeth Tower. One of the predominant features of the building is the pyramid roof which contains a flashing aircraft warning light, a rare feature for buildings in the United Kingdom. The distinctive pyramid pinnacle is at 240 metres (800 ft) above sea level.
One Canada Square is primarily used for offices, though there are some retail units on the lower ground floor. It is a prestigious location for offices and as of January 2013 was 100% let. The building is recognised as a London landmark and it has gained much attention through film, television and other media when its status was the tallest building in the United Kingdom and continues to gain attention.

Construction on the tower began in 1988. Construction was given to Sir Robert McAlpine & Sons in association with Ellis Don of Toronto,[10] but they were slow at building the tower, partly due to building workers going on strike in the Summer of 1989, so Lehrer McGovern took over. Lehrer McGovern contracted out most of the work to Balfour Beatty because the Canary Wharf Tower was a difficult building to build. In total, about 27,500 metric tonnes of British steel and 500,000 bolts were used during construction.

By June 1990, the tower overtook Tower 42 (previously known as the Nat West Tower), becoming the tallest building in the United Kingdom.
On 8 November 1990, the tower was topped out when the top piece of the pyramid roof was put in place by crane. The celebration was attended by many famous architects, recognised engineers and political leaders. Amongst them were César Pelli, Brian Mulroney, Peter Rice, Man-Chung Tang, and Margaret Thatcher. Paul Reichmann, the owner of Olympia & York gave credit to Pelli for his building design as “this inauguration symbolises the spirit with which buildings can be achieved”. Margaret Thatcher told the distinguished audience that the tower can become a “national recognised landmark”.

The pyramid roof is an important feature of the building, enclosing a maintenance plant and housing facilities for water supply and window washing, and an aircraft warning beacon. The pyramid itself is 40 metres high and 30 metres square at the base. It is made from stainless steel and is held together by 100,000 nuts and bolts, with a weight of over 100 tons. A louvre access door opens to allow a shining beacon to identify the building to passing aircraft.
Water
Water is pumped up to the pyramid roof, and is continuously replenished. A common sound that is heard inside the pyramid roof is water being moved around. The water is used for general water requirements, such as toilets, etc. The tower consumes an average of 200,000 imperial gallons (910,000 L) of water per day.
Window washing machines
The machines for washing the building windows are stored on the roof of the building. There are two types: one is automatic and the other is manual. The automatic window washing machines run on rails on the sides of the building. This machine can clean a window in 2.6 seconds. It consumes 426,000 gallons of water per run to clean the entire tower. The other machine is a manual window washing cradle. Both of these machines for cleaning the windows are supported by rails that run around the outside of the pyramid roof and that are bolted down into the maintenance floor itself.
Aircraft warning lights
The aircraft warning light is at the very top of the pyramid. Access is via a ladder with a warning sign stating that unauthorised entry will lead to dismissal. The tower uses an omni-directional light usual for marking hazards. It has very long life and requires little maintenance. Light intensity achieved is well in excess of the required 2,000 candelas. It uses low power consumption and the unit can be flashing or steady. 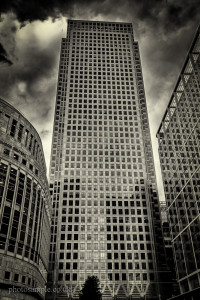 Some more photos of the walk on the River Thames: 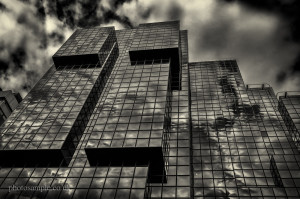 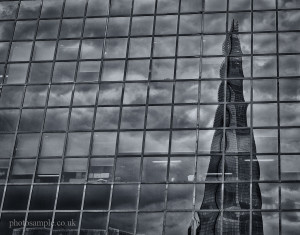 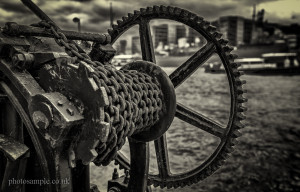